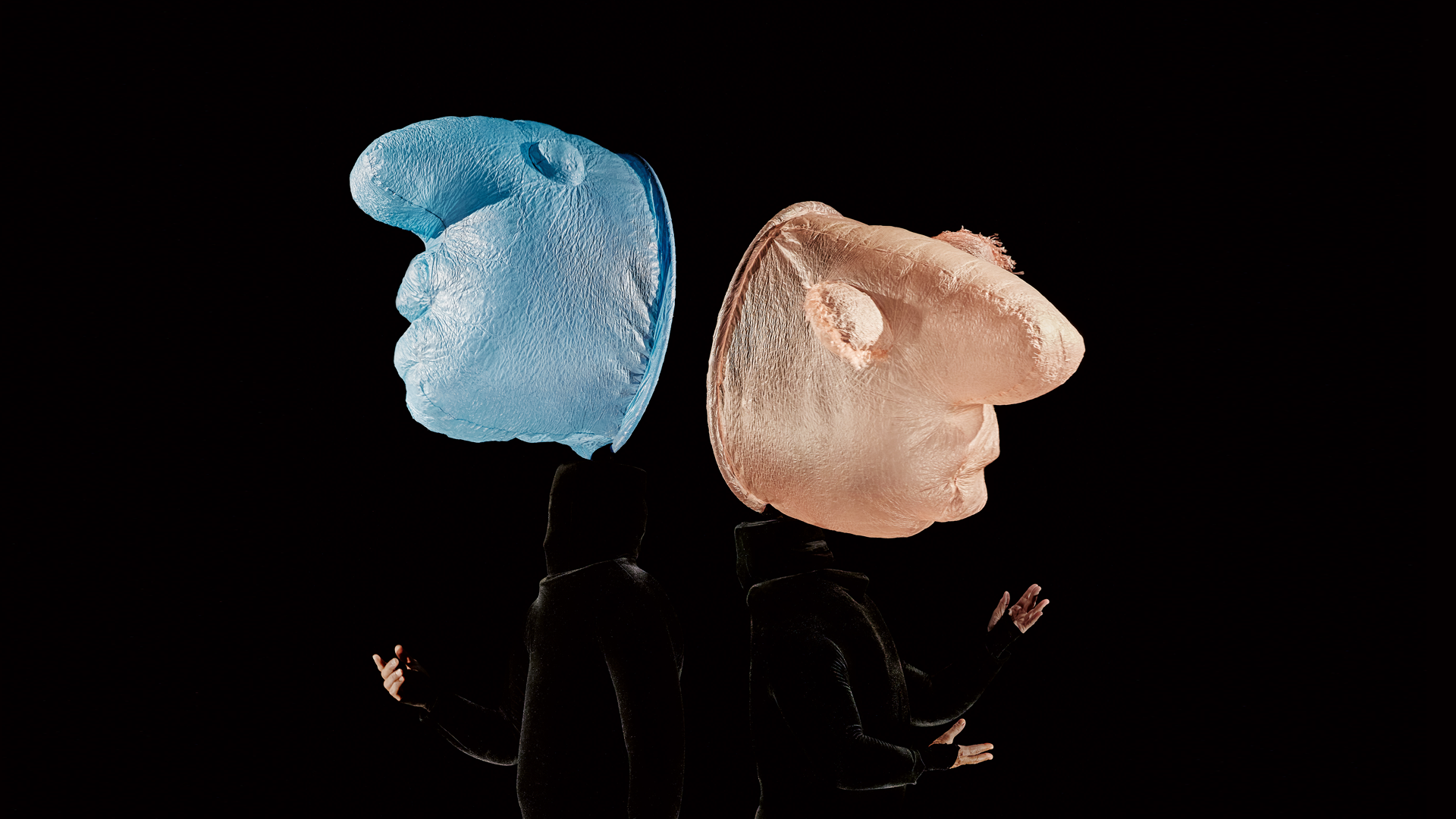 “Mummenschanz succeeds brilliantly because of its originality, exceptional ingenuity, sense of surprise and deft satirical touches.”

A poetic journey into a world of silence

MUMMENSCHANZ takes its “50 Years” anniversary production on tour through  The United States.

Since it was founded in 1972, MUMMENSCHANZ has delighted audiences and  electrified theaters all over the world. For its anniversary production – aptly titled “50  Years” – the Swiss multi-award-winning troupe will be taking audiences on a journey  of imagination and poetry, showcasing the most beloved sketches from the  foundation’s repertoire over the past half-century.

Since it was founded in Paris in 1972, MUMMENSCHANZ has been a global touchstone for  contemporary mask-based theater that transcends cultures and linguistic boundaries. The  theater company’s three founders, Floriana Frassetto, Andres Bossard and Bernie Schürch,  conquered the world without saying a single word, but using a purely visual language of  unsupported masks against a black background. As MUMMENSCHANZ, they carved out a  new niche in the performing arts.

With Andres Bossard’s passing in 1992 and Bernie Schürch’s retirement in 2012, Floriana  Frassetto remains as the main artistic driving force behind the multi-award-winning troupe.  The foundation has put on a host of full-length productions over the past 50 years. The  masks, performance techniques and repertoire have all evolved over the course of more than  100 productions, and MUMMENSCHANZ has used them to great effect on every continent.  A half-century after it was founded, the troupe continues to be one of the most popular  theater attractions worldwide, and is adored by critics and audiences alike.

To mark the foundation’s anniversary, Floriana Frassetto – the poet of silence – has devised  a production that will take the public on a 50-year journey through the fascinating world of  MUMMENSCHANZ. It will take a look at the most popular, successful productions of years  gone by, featuring legendary characters such as the Clay Masks and the Toilet Paper Faces.  “50 Years” will also see appearances by the delicate, air-filled Giants, the Pipe Creature and  plenty of other bizarre objects and shapes brought to life by the troupe’s five performers. The  production will also include sketches featuring surprising new forms and characters that  capture the signature MUMMENSCHANZ spirit.

This is an anniversary production without words or music. An imaginative, poetic journey that  needs no subtitles. “50 Years”: taking audiences on a magical, captivating two-hour journey  through the infinite – yet familiar — world of imagination conjured by MUMMENSCHANZ.

Fifty years on from its foundation, the “musicians of silence” are continuing to practice their  craft. As curious and ready for a challenge as ever, MUMMENSCHANZ takes everyday  objects and gives them a new lease of life. With its “50 Years” production,  MUMMENSCHANZ is taking a look back at its history – while writing the next chapter in its  story of inimitable, non-verbal language. “50 Years” is a playful, interactive experience and a  poetic production for all generations.

This fantastic journey through the world of MUMMENSCHANZ is lively, humorous, full of  affection and brimming with imagination. After completing a 25 city tour of Switzerland, with  over 100 shows, the U.S anniversary tour will begin on October 9th 2022 at the Dibden Center in Johnson, VT. It will travel across the United States finishing at the end of  November 2022 in Phoenix, AZ.

Student & Teacher Tickets
The Charleston Gaillard Center’s Education & Community Program is pleased to announce student and teacher tickets are available for this performance. Limited to two tickets per person with valid student/teacher ID.
Tickets available in advance: Tickets are $20 (plus applicable fees). Green seats on seating map. Ticket purchasers must pick up their tickets at Will Call the night of the performance. NOTE: Please make sure to select Student/Teacher when purchasing tickets to receive your discount.
Day of Rush: Tickets are $25 (plus applicable fees). Available two hours prior to show time, best available.

Click here to sign up for our education emails, including those about our student and teacher ticket program.

For Those in Middle School and Above (Including Adults!)

Floriana Frasetto, founder of Mummenschanz, will engage all with the history of Mummenschanz and the art behind the company. Props from the performance will be demonstrated. Q&A will follow.

Please learn about the company here prior to attending.

Floriana Frassetto (Swiss) is the daughter of Italian emigrants to the States (Norfolk, Virginia), she studied at Alessandro Fersen’s Theatre Academia in Rome from 1967 to 1969. She completed her training as actress attending a comprehensive course (mime, acrobatics, dance) at Roy Bosier’s Teatro Studio. Between 1969 and November 1970, she worked in Rome in several pantomime and theatre productions. The idea of founding MUMMENSCHANZ resulted from meeting, in 1972, Andres Bossard and Bernie Schürch … two young Swiss clowns called Before and Lost.

She has since then co-invented the repertoire of MUMMENSCHANZ and played in each performance. The creation of costumes, the choreography of Giancarlo Sbragia “Faust” played in the Roman amphitheatre of Taormina (Sicily), the staging of some MUMMENSCHANZ scenes for André Heller’s musical Body and Soul, the artistic collaboration with Isabelle Baudet for the children musical Oliver Twist in Lausanne (Switzerland) all rank among her best individual achievements.

FLORIANA FRASSETTO Floriana Frassetto (Swiss), studied at Academia Alessandro Fersen in Rome from 1967 to 1969. She completed her training as an actress while attending a school for mime and acrobatics at Roy Bosier‘s Teatro Studio. She then worked with the company of Roy Bosier in several school productions that toured Italy. The idea of founding MUMMENSCHANZ resulted from meeting, in late 1970, Andres Bossard and Bernie Schürch – two young Swiss clowns called “Before and Lost” that performed a partially spoken show. Floriana became the third member of the new company in 1972 and together they co-created the repertoire of MUMMENSCHANZ, converting the spoken numbers to masked visuals. Floriana has performed on tour worldwide for the last 47 years. She feels herself an artisan of fantasy and has always been motivated to construct new shapes along with Bernie. Since Bernie’s departure in 2012 she has been tormented by the challenge of creating a new show, which she has now done with plenty of new ideas. That has been possible thanks to the collaboration with Tina Kronis and Richard Alger. Other notable experiences include the choreography and the costumes for Giancarlo Sbragia’s Faust and André Heller‘s musical Body and Soul, and an artistic collaboration with Isabelle Baudet for the children musical Oliver Twist in Lausanne (Switzerland). She is the artistic director of MUMMENSCHANZ.

TESS BURLA Tess Burla was born in 1981 and grew up in Murten, Switzerland. After completing her studies in psychomotor therapy, she trained as a dancer in Barcelona and Berlin. In 2009, she completed a master’s in dance education at Zurich University of the Arts (ZHdK). She has been a member of Cie Chapeau (and formerly Paula fliegt) since 2015. She gained experience working with Marcel Leemann, and as part of Brigitta Schrepferʼs Somafon, human kinetics movements arts, and Collectif de Marchepied. Burla works as a freelance dancer and is a founding member of cie deux plus. In addition to dance performances in collaboration with live musicians (Simone Abplanalp and Ursula Hofmann), she also made an appearance as part of the clown duo Nasva and Ravu in 2018. Her journey with MUMMENSCHANZ began in 2019.

SARAH LERCH Sarah Lerch was born in 1983 and grew up in Bern, Switzerland. She studied acting at the Accademia Teatro Dimitri before going on to create her own dance and theater productions. From 2009 to 2011, she toured throughout Europe with the Czech company Continuo Theatre. She then returned to Switzerland and completed a master’s degree in Physical Theatre at the ATD. She is a two-time winner of the Migros Kulturprozent competition and a member of the Swiss Study Foundation. In 2014, she co-founded the international company Wakouwa Teatro and gave birth to a baby boy. She is a versatile performer and choreographer working on a variety of major stage projects, with collaborators such as Volker Hesse, and regularly teaches acrobatics and aerial silks. From 2019 to 2020, she was co- director of the Theaterzirkus Wunderplunder with Kevin Blaser. Sarah joined MUMMENSCHANZ in 2021 for its 50th anniversary production.

KEVIN BLASER Kevin Blaser (Swiss), born in 1990, is a young artist from Ticino. In his early age he showed a strong interest in movement and art. He stood out in gymnastics and in skateboarding in which he found a companion with whom he travels the world. Passionate for music, he perfected his skills in percussion and drums, with which he continues to play in various bands. Through theatre he discovered the means for full expression of himself and entered the school for physical theatre Accademia Teatro Dimitri, where he obtained his Bachelor in 2015. He played in different theatre and cinema productions as „Gilgamesh“ (from Patrizia Barbuiani), „Gotthard 2016“ (from Volker Hesse), „Tutti Giù“ (from Niccolò Castelli). In July 2016 he started his journey with the MUMMENSCHANZ company.

MANUEL SCHUNTER Manuel Schunter was born in Munich (Germany) in 1985 and has lived primarily in Switzerland since 2007. He completed a bachelor’s degree in Physical Theatre at the Accademia Teatro Dimitri and a master’s degree in Expanded Theatre at the Bern University of the Arts. He has since given numerous performances and toured as a clown in the world of circus and vaudeville (with Circus Monti, Circus Roncalli, Das Zelt, Circus Sarrasani and at Circus Knie’s centenary celebrations, among others). He was a permanent ensemble member with the Theater Madame Bissegger and the Origen Festival. Manuel’s theater engagements have included performances with the Stadttheater Freiburg, LAC Lugano, and Espace Nuithonie. Besides his activities as a performer, he also directs various stage productions and lectures at the Lucerne University of Applied Sciences and Arts. Manuel has been a member of MUMMENSCHANZ since the summer of 2022.

ERIC SAUGE Eric Sauge (Swiss) is the Technical Director of the company. With more than 10 years of experience in the entertainment business, he now specializes in lighting and machinery effects. Employment by large organizations provided him with world-wide travel. Through his experience and many trips abroad he acquired solid knowledge in technical and team management. Back in Switzerland he continued to train in the field of lighting for events such as theater and television, in which he mainly occupied the roles of console operator and project manager. In 2014 he met MUMMENSCHANZ in Lausanne, and wishing to return to the theatre scene, he joined them as their Technical Director.