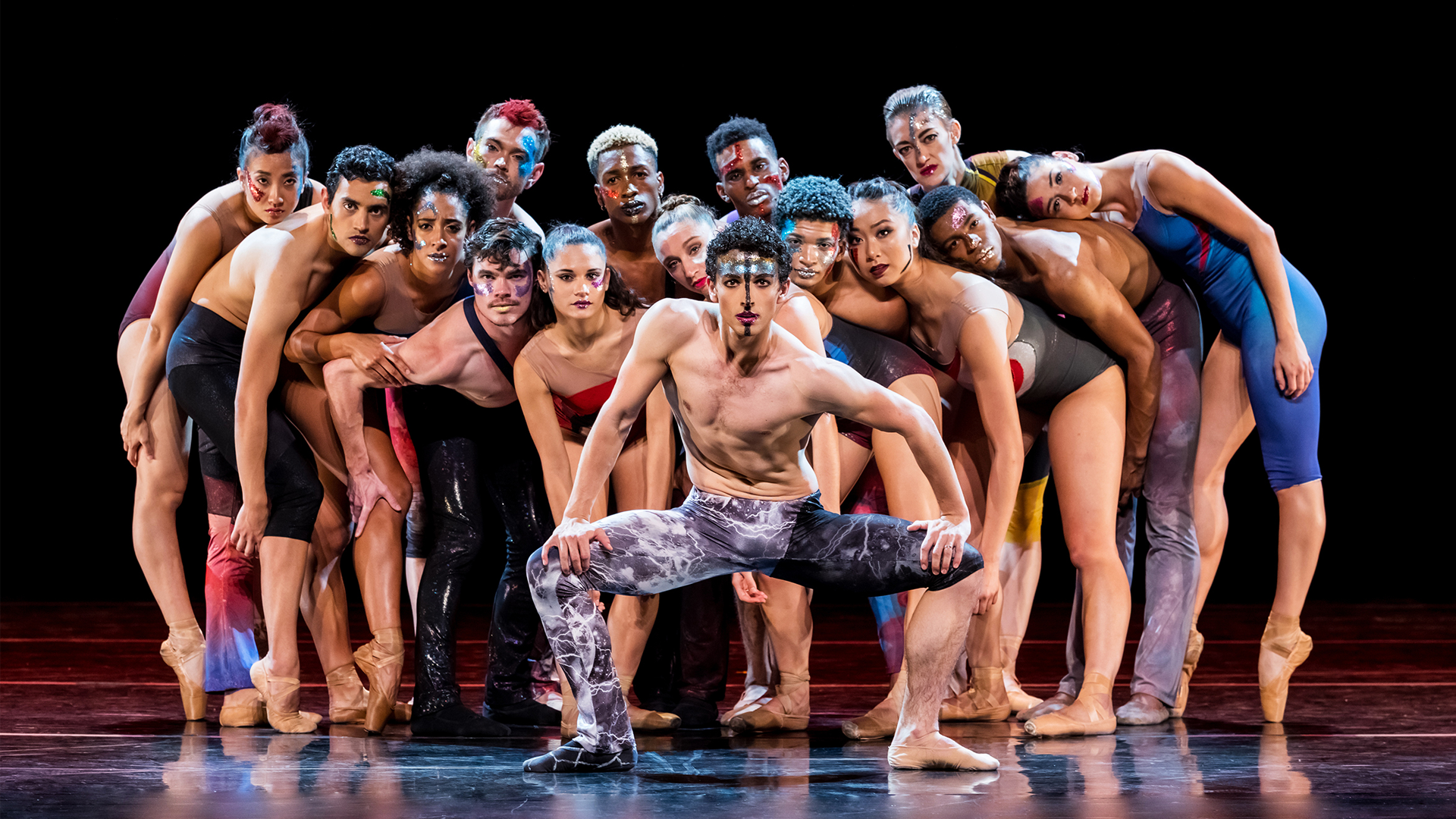 “This was simply one of the most exciting performances I’ve seen on the dance series, less a rock ballet than a rock concert…”

“Companies like Complexions are game-changing: they’re forging a path for what ballet can be instead of what it historically has been.”

Founders Dwight Rhoden and Desmond Richardson, armed with a rich Alvin Ailey lineage and a cadre of 18 spectacular dancers, have re-envisioned ballet through technical precision, athletic prowess, and sheer passion. Their blockbuster hit, STAR DUST: From Bach to David Bowie, honoring two musical icons, has rocked the dance world and will make your spirits soar!

SNATCHED BACK FROM THE EDGES (WORK IT OUT excerpt)

PROGRAM NOTE
Endgame/Love One is ultimately about love and survival, infinite possibilities, closed chapters, and next steps. A collection of stories, moods and fascinations.

Snatched Back from the Edges (WORK IT OUT excerpt)

PROGRAM NOTE
SNATCHED BACK FROM THE EDGES is meant to be a chronicle of the indelible human spirit, in the eye of a storm. Much of this work was conceived & created at the height of the pandemic, with the additional challenges of gun violence, racial inequity, and social struggles at the forefront of our daily lives. It is inspired by the pain, tenacity, and advocacy for change – that inner strength that continues to propel the world forward – through it all.

VIII.  ROCK AND ROLL SUICIDE (The Rise and Fall of Ziggy Stardust and The Spiders from Mars album 1972)

STAR DUST is the first installment of a full evening length Ballet tribute to the genre bending innovation of one of the prolific Rock Stars of our time – DAVID BOWIE.  This Ballet takes an array of his hits and lays a visual imprint, inspired by his unique personas and his restless invention artistically – to create a Rock Opera style production in his honor.  With Bowie’s 40+ year career and 25 albums that stretch across musical borders – STAR DUST pays homage to the iconic and Chameleonic spirit of what can only be described as… BOWIE.

About Complexions Contemporary Ballet
Complexions was founded in 1994 by Master Choreographer Dwight Rhoden and the legendary Desmond Richardson with a singular approach to reinventing dance through a groundbreaking mix of methods, styles, and cultures. Today, Complexions represents one of the most recognized and respected performing arts brands in the World. Having presented an entirely new and exciting vision of human movement on 5-continents, over 20-countries, to over 20-million television viewers, and to well over 300,000 people in live audiences, Complexions is poised to continue its mission of bringing unity to the world one dance at a time.

The Charleston Gaillard Center’s Education & Community Program is pleased to announce student and teacher tickets are available for this performance. Limited availability. Limited to two tickets per person with valid student/teacher ID.

Tickets available in advance: Tickets are $20 (plus applicable fees). Orange Seats on Seating Map. Ticket purchasers must pick up their tickets at Will Call the night of the performance. NOTE: Please make sure to select Student/Teacher when purchasing tickets to receive your discount.

Click here to sign up for our education emails, including those regarding our student and teacher ticket program.

The master class will also include a mock audition where students will have the opportunity to experience the process of an audition and learn what goes into the process.

Students should wear form-fitting clothing, socks or ballet slippers (socks should be black or flesh tone).

Please arrive at the Gaillard Center to check in at 4:30pm. Check-in will be located on the second floor of the Gaillard in front of the performance hall doors.

Desmond Richardson was the first African-American principal dancer of American Ballet Theatre, and is hailed by The New York Times as one of the greatest dancers of his time. Nominated for a Tony Award for his role in the original Broadway cast of Fosse and deemed a standout in the Tony-Award winning production After Midnight, Richardson is highly esteemed by the concert dance and American theater community. He appeared in Twyla Tharp’s Broadway production Movin’ Out, and had his singing debut in Burt Bacharach’s and Hal David’s The Look Of Love, choreographed by Ann Reinking and Scott Ellis.

Richardson, a Young Arts Finalist and Presidential Scholar, has received numerous awards including the Dance Magazine Award, Capezio Award, Ailey Apex Award, L.A. Ovation Award, Bessie Award, YoungArts Alumni Award, and most recently the Roosevelt “Rosey” Thompson Award presented by the Presidential Scholars Foundation.  In the spring of 2109, Richardson received an honorary doctorate degree from The University of North Carolina School of the Arts in recognition of his extensive contributions to the field of dance.

Richardson has been a celebrity guest performer and choreographer for productions across media such as the American Music Awards, the Academy Awards, City Center’s Encores! series, Italy’s AMICI, and international franchises of So You Think You Can Dance. Richardson has been featured by famed artists such as Michael Jackson, Prince, Madonna, Elton John, and Aretha Franklin, and he appears in celebrated films such as the Oscar-Award winning Chicago, Julie Taymor’s Across the Universe, and the recent independent film, Fall to Rise. He has worked with fashion icon, Tom Ford, Chic’s Nile Rodgers, and recently contributed to Grammy-Award winning Jill Scott’s video Back Together, which features dancers from COMPLEXIONS.

Internationally and domestically, he is a master teacher for dance programs such as the New York’s All Stars Project, YoungArts Miami, United Way, The Pulse, NYCDA, and ASH. He served as co-creative director and choreographer with David Monn for the Park Avenue Armory Gala Masquerade. Richardson is currently guest artist in residence at USC’s Glorya Kaufman School of Dance and is the visiting adjunct professor of dance at Southern Methodist University.

Paul has worked closely with important dance pioneers in the field and has performed master works from the repertoire and artistic direction of Gerald Arpino, Robert Joffrey, Twyla Tharp and Dwight Rhoden, to works by Petipa, Ashton, Nijinsky, Massine, Balanchine, Forsythe, and Alonzo King. She was a principal dancer with The Joffrey Ballet/NYC and has extensive national and international touring credits. Paul performed both leading roles and served on the creative team and as dance captain for Twyla Tharp’s Tony award-winning Broadway musical, Movin’ Out. Her awards include The Princess Grace Award, winner of The International Dance Competition of the Americas, Detroit Renaissance Hero Award, Sue Nine Endowment for Faculty Achievement Award, Wayne State University’s College of Fine, Performing, and Communication Arts Teaching Award, and the Copperfoot Award.

Jillian Davis (Dancer) from Kutztown, PA and began her ballet training at the age of 3. She studied with Risa Kaplowitz and Susan Jaffe at Princeton Dance and Theater Studio in Princeton, NJ. Jillian attended San Francisco Ballet, School of American Ballet, Pacific Northwest Ballet and LINES Ballet programs. Jillian has been a company member with Complexions since 2014. She has been part of Dwight Rhoden world premieres including Headspace, Strum, Gutter Glitter, Star Dust, Bach 25, Woke, Love Rocks, and a world-premiere solo, Elegy. She has also performed installation works by Desmond Richardson and an excerpt of Approximate Sonata by William Forsthye. Along with being a dancer with Complexions, Jillian is part of the core faculty for Complexions Dance Academy.