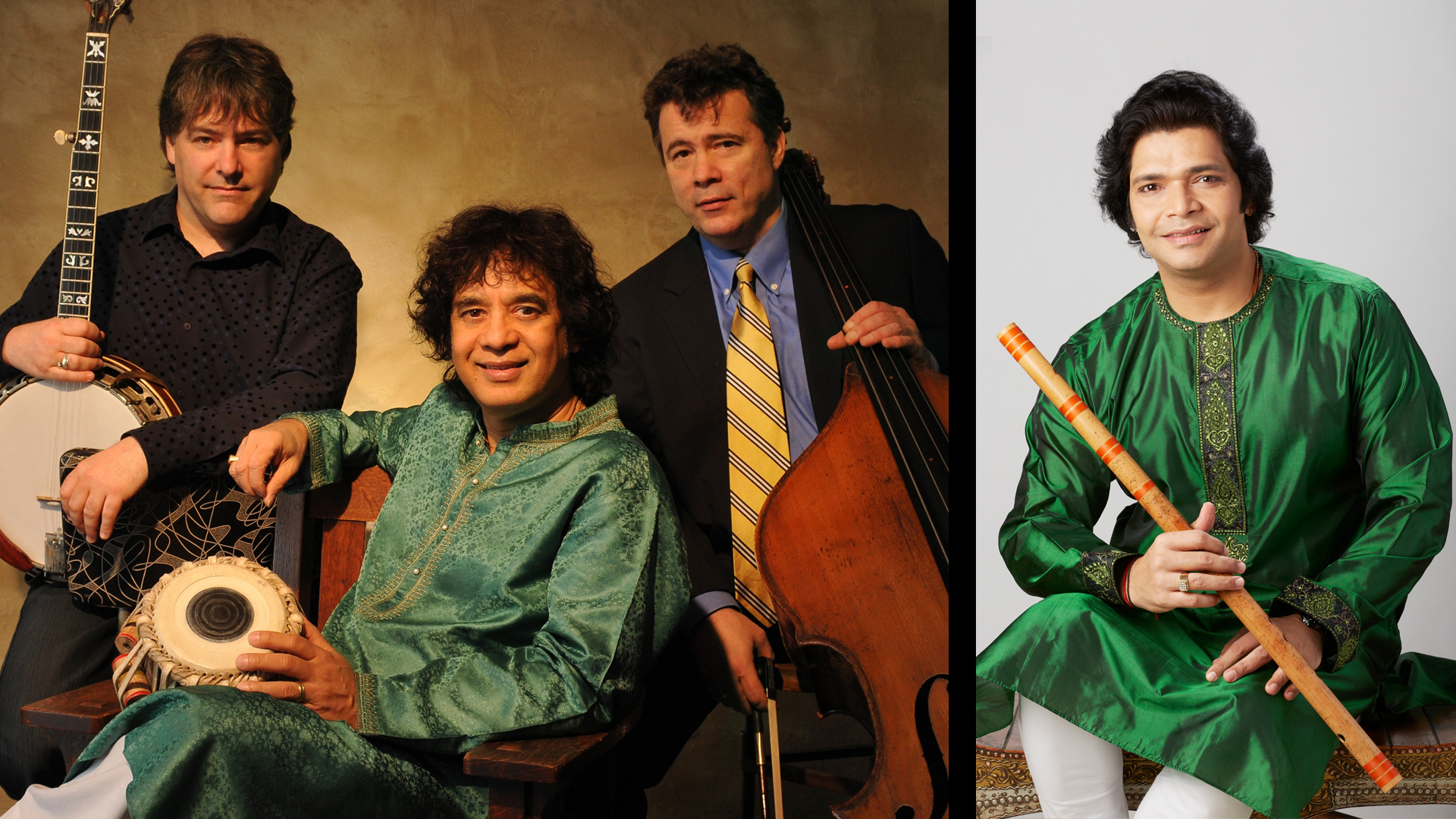 Begin with the most creative exponent of the banjo in our time, Béla Fleck.  Add the greatest living player of the tabla, the legendary drums—and drummer—of India, Zakir Hussain. Establish the trio with the acclaimed virtuoso of the classical (and bluegrass!) bass, Edgar Meyer.  Combine with a special guest, the great Indian flautist Rakesh Chaurasia. Then finish the ensemble with the magic of improvisation.  The results will be some of the most remarkable music anyone will hear this year.

The trio came together a decade ago and created The Melody of Rhythm, a truly elegant release.  Fantastically busy musicians—each of them work with multiple ensembles—they came together from time to time, frequently joined by Mr. Chaurasia, until finally the stars aligned and they found room to schedule further tours, including two in the year 2023.  We promise that it will be worth the wait.

The story begins around 1980 when Edgar’s friends Sam Bush and John Cowan told him about a guy they thought he’d enjoy playing with, Béla Fleck by name.  “We first played together in Aspen, just busking, but we were pretty close pretty early.  The thing we had in common was that both of us were completely comfortable talking about music 24/7 – playing, instruments, technology, the machinations of human beings involved, any part of music.”  They played even more.  “As players,” Edgar added, “we were at a formative stage, so to some degree we were shaped by each other.  Béla’s inventive, he cares about the details, and he’s willing to put rhythm above other things, to prioritize it.”  And rhythm led to the next step.

Béla recalled, “I met Zakir at a workshop at a festival that he did with (Flecktone member) Future Man.  Both Edgar and I thought we could learn a lot from him.  When the Nashville Symphony built its new building, they asked Edgar and I to write a concerto.  Since we’d recently premiered a double concerto, they suggested a triple concerto with someone special.  Zakir immediately came to mind.  At first we only composed together, working on The Melody of Rhythm concerto.  Then we added the six trio pieces to complete the album, but it was in the touring that we really started to develop a serious musical rapport.”

Working on the concerto with Béla and Edgar was “a revelation,” Zakir says, “an eye-opener, a whole other way to make music, especially for me as an Indian classical musician. I had not imagined that tabla could be incorporated into the world of Western classical music and bluegrass all at the same time. It opened up a whole new avenue for me to explore.”

Béla continues:  “As a banjo player, with short percussive notes, I often feel like a percussionist.  Playing with like beings who possess a powerful command of time can set me free. Zakir brings flow, support, and an uncommonly strong sense of time to the playing, so I can relax and flow too.  And he’s a forward leaner, by which I mean it feels natural to him to let the tempo pick up subtly, as we do in bluegrass music.

He brings a sense of effortless mastery to his art, so that he’s often not working at things, just flowing.  He doesn’t feel he has to play at 100% difficulty rate at all times, and he knows how complicated to make it for the people that he’s playing with.  He plays what’s appropriate and gives you just the level of stimulation you need.”

Edgar concurs.  “As to playing with Zakir, it’s still a honeymoon for me to be playing with him.  He’s the most interesting musician I’ve encountered in the second half of my life.  I try to enjoy it as well as seeing how much I can learn.  He’s just a unique rhythmic force.”

“This tour will include new music,” Béla adds, “and ideally we’ll develop a new album out of it.  And the new great thing is that this time we’ll also have Rakesh as a regular component, which really opens up the sonic palette.  Edgar has a sustain buddy now.  Rakesh came out and played with us a good number of times, and it was a profound connection—he’s easy to play with and fun to be around, and it balances the band not only culturally but in terms of sustain.”   Edgar added, “Each person in the band is clearly devoted to being a great accompanist as well as a strong soloist.  Rakesh will be interacting with Béla and I all the time.”

Béla sums it up:  “We all provide things that differ from each other.  Edgar brings in a powerful bass sense, and accesses levels of harmony that neither Zakir nor I can offer; he’s really figured out how to interface harmony with Indian music.  I don’t know what I bring, but I’m glad neither of them can play banjo!  And Rakesh is just the frosting on the cake, or actually on a hipper level, the sherry in the she crab soup.  This is going to be fun.”

Edgar concludes, “I’m looking forward to a great four-way dialogue, and it will be unique.”

STUDENT & TEACHER TICKETS
The Charleston Gaillard Center’s Education & Community Program is pleased to announce student and teacher tickets are available for this performance. Limited availability. Limited to two tickets per person with valid student/teacher ID.
Tickets available in advance: Tickets are $20 (plus applicable fees). Orange seats on seating map. Ticket purchasers must pick up their tickets at Will Call the night of the performance. NOTE: Please make sure to select Student/Teacher when purchasing tickets to receive your discount.
Day of Rush: Tickets are $25 (plus applicable fees). Available two hours prior to show time, best available.
Click here to sign up for education emails, including those regarding our student and teacher ticket program.